This is part one of a talk I gave at the Democratic Photo Club held at Stills Gallery in Edinburgh on November 6th. Members are invited to set a theme for others to interpret through photography with a talk, discussion and show of members work. For November I chose the theme of NARRATIVE TAKES and was interested in artists who create tensions between reality and fiction in their work challenging our conventional scripts. To introduce the theme I told two stories of my own inspired by the artist Thomas Demand. Here is the first story including a short intro on Thomas Demand. 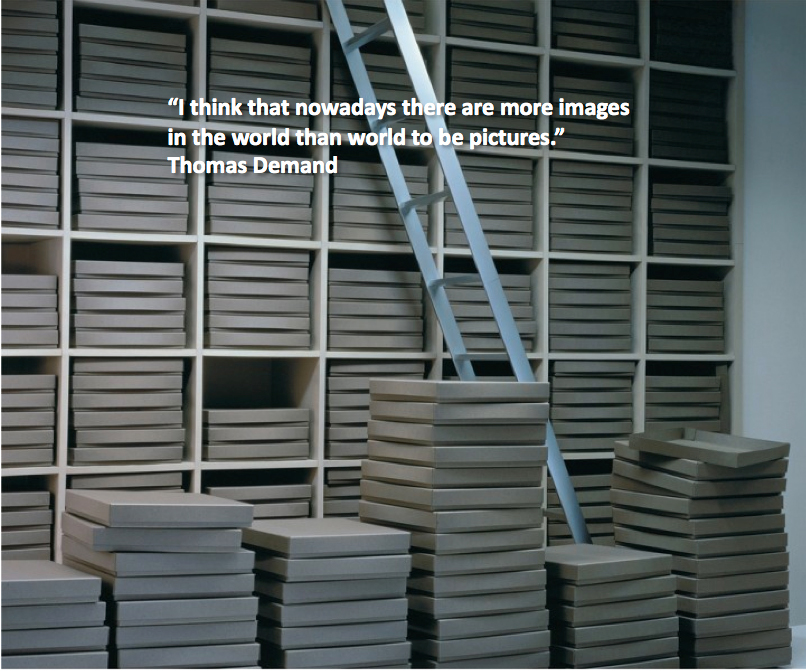 I first saw the work of Thomas Demand at the Serpentine Gallery in 2006. Living in Berlin at the time, the fact that he was German and living and working there and of my generation were other factors that attracted me to seeing the show. Apart from that, London is my hometown and a gallery visit was a way for my Dad and I to spend time together, to structure and frame our somewhat difficult relationship. On a basic level it was something to do.

When you first see a work by Thomas Demand, you may think it is a straight photograph of a scene or interior. As sources for his ideas he uses found or archive photographs and also personal memories. He constructs a life size model from paper and card which he then photographs again. After the photo is taken, the model is destroyed. It is only when you look closely that you realise the deception, that the photograph is lacking certain details or appears too perfect.


You naturally begin to create a narrative from your own associations with the place/image in front of you. But even when you know the  story behind the image if there is one at all, you realise the world Demand has created doesn't exist, that it is fake and constructed. How reliable then are the narratives you choose in your everyday life and the ones you see in the media?

When we arrived at the Serpentine, we saw that the walls of the gallery were covered in hand-blocked ivy themed wallpaper, in four colour tones to reflect different times of day. Normally you would expect art photography to be placed on a white wall. There appeared to be a deliberately stark contrast between the handicraft of the wallpaper and the apparent slickness displayed in the large photographic images.

A 3 metre wide photograph in the exhibition called 'Copyshop' shows at first sight that: A ubiquitous space filled with photocopiers. There are no logos on the machines or paper. An impersonal space has been further stripped of clues. The photographic image of a photocopy room would appear to be the very antithesis of the process of handicrafts. Infact, by using the same material as a photocopier, paper, to make the somewhat banal scene in front of us Demand raises questions of reproduction, originality and the intrinsic worth of objects and images themselves. It is in itself a narrative that resounds through the gallery space, partly absorbed by the textured wallpaper, bouncing lightly off the glass surface of the photographs until it reaches us, where it will fall upon us to listen to our associations with the spaces that no longer exist or perhaps only once existed as an idea in paper that Demand once created. 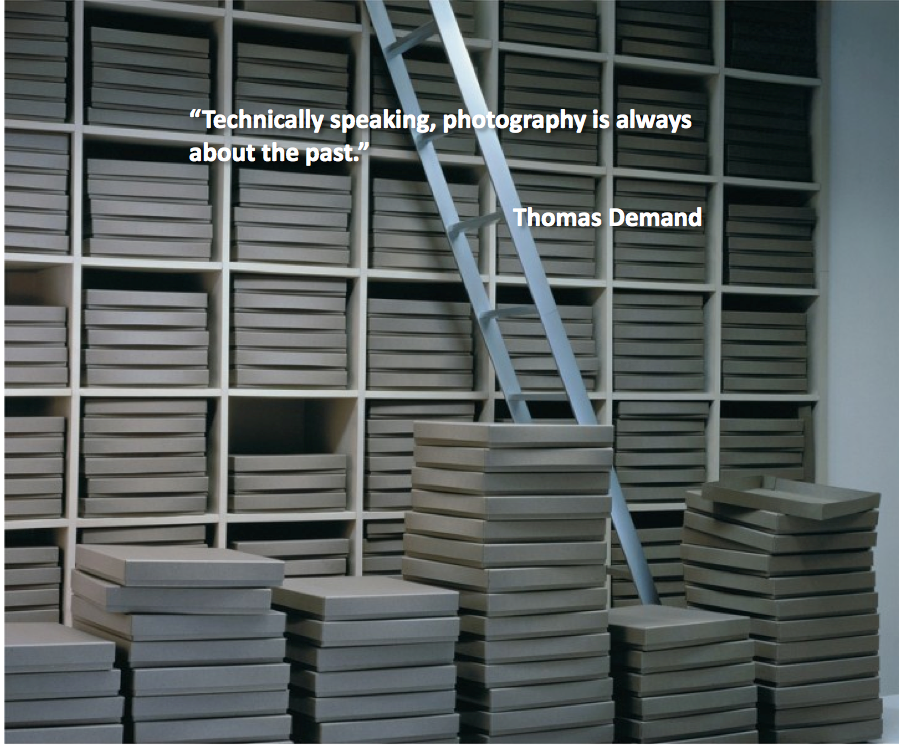 After the show, I wanted to buy a book on Demand’s work. A disagreement began between my Dad and I about buying the show’s catalogue. My Dad thought it was too expensive and bought me another Demand book from a past exhibition: 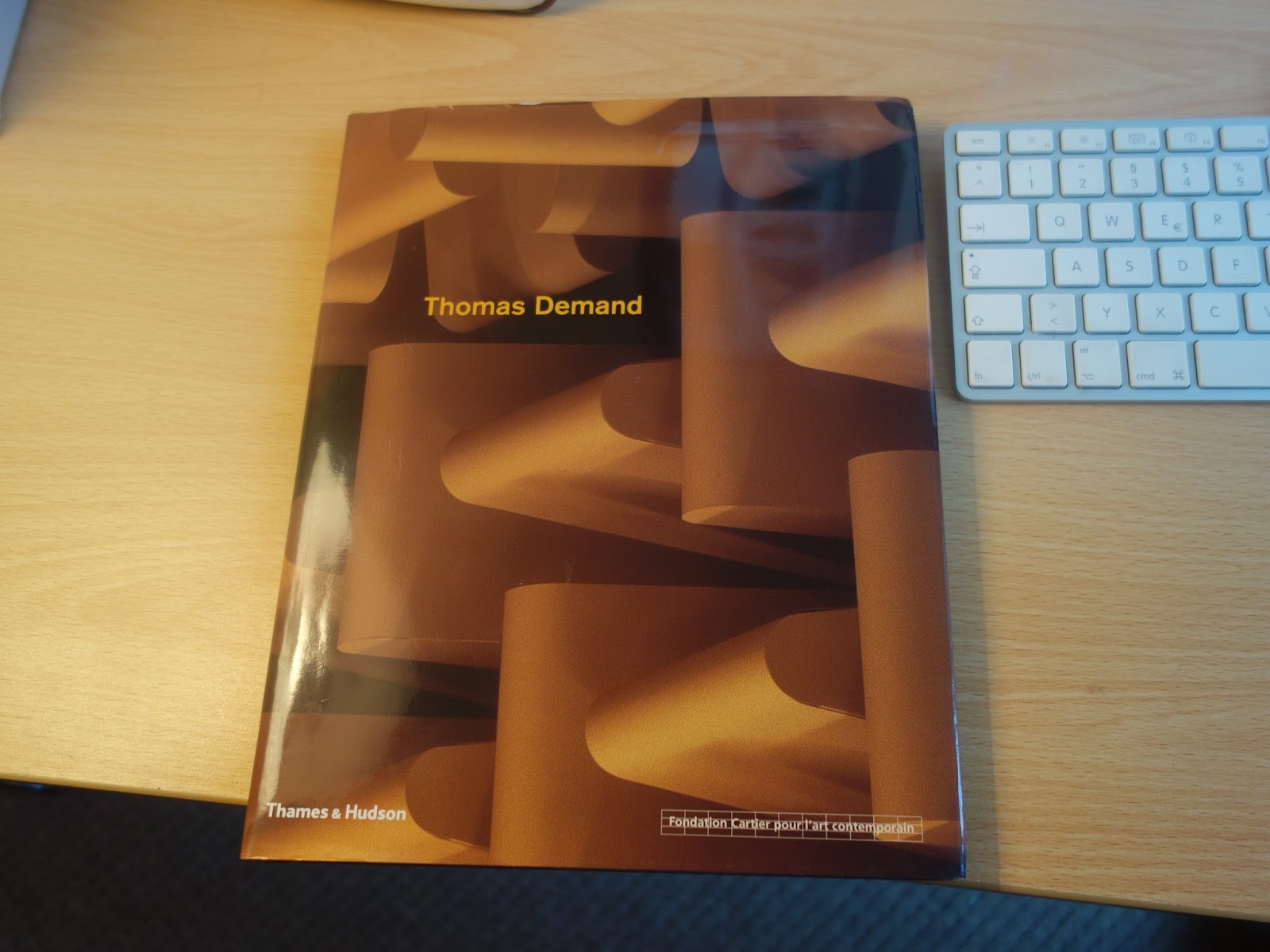 We had even walked away from the Serpentine  into Kensington Gardens and along the lake when I realised I really really wanted the exhibition catalogue as well as or instead of the other book. I was an adult but also the spoilt little girl with her Dad who felt she had to get what she wanted. Sometimes I hate this trait of mine, I get seduced by an exhibition and feel I must have “it”, whatever that thing is. I guess I am not alone in this as I have noticed the gift shops getting bigger in relation to art galleries and museums spaces. Anyway, I convinced myself that I couldn’t live without this catalogue, as it had pieces of the original wallpaper stitched into the book and was of the exhibition I had actually seen. Why couldn’t just seeing the exhibition be enough? I got my way, and we headed back and soon the issue of money seemed to loom up large between us. I felt embarrassed now as it turned out my Dad had only wanted to buy me something and he had. I also felt his dissaproval keenly that I wanted to spend more money which we both knew I didn’t really have on something that was in his eyes - unneccessary.

In the midst of our discussion on the gallery steps, a man approached us and said he was a patron of the Serpentine and as such could get us a discount on the catalogue. (We must have been attracting attention). He accompanied me to the sales desk and I bought a catalogue for myself that my Dad still thought was too expensive even with a discount and was more expensive than the one he had bought for me. It seems so poignant to me that this personal narrative has formed alongside the many narratives of the exhibition itself.

Now turning the pages of the book eight years later I see that the back of one piece of wallpaper has tiny circular ink flecks and mottling soaked through from the front of the paper itself. 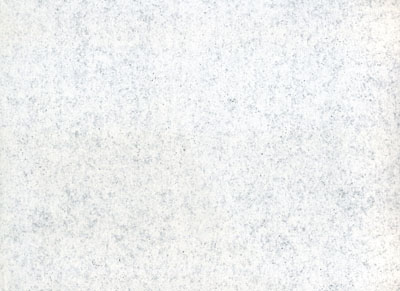 This is echoed on the next page in “Constellation” an image of how the night sky would appear exactly 300 years into the future.
With this photograph, Demand defies the logics of photography that it is supposedly telling us a narrative that is always about the past. At every new exhibition space he reconfigures the image again so that it creates an image at that space exactly 300 years into the future.

Images, whether taken by us or present in the media become part of the landscape of our past. Thomas Demand literally punches holes in paper to make this photograph of the night sky and in doing so he also punctures the façade of these narratives. A projected constellation of the skies has no stories only the ones we choose to project upon it. I see this photograph as something wholly unemotional. I think that is what Thomas Demand does with the photographs and constructions that he makes. He takes out the detail, creates a certain vacuum lacking in emotion. In doing so he reflects upon and lays bare our own personal and cultural associations and ironically, emotions.

Again, there is a twist to the story of this photograph. We are not seeing an image of the future at all but one of the past. The projected constellation is of light travelling towards us is from a million years ago due to the speed of light. We are not dealing with nice human distances of miles and kilometres either, or digestable human nuggets of time we frame our small stories within. Therefore to project any sentimentality, emotion or stories onto it is absurd.  Still, we do it.

I am writing this about eight years after visiting the Serpentine Gallery with my Dad. I can still touch and look through the catalogue in front of me. I am glad I bought it, as it brings back happy memories as well as being a beautiful object. This is even as I recollect with a certain embarrassment the situation under which the catalogue was purchased. This small story echoes many other stories that played out between my Dad and I, each incident not allowed to be isolated or played out alone but heavily loaded just like a Demand photograph. Now, just eight years later, a small human scale of time, I can only remember my Dad through the photographs and memories I have of him, and now this story.


(More images and information  on Thomas Demand available on his website)


Posted by Catherine Marshall at 19:55